I’ve had half a pack of digestives staring at me for the last week and a bit. Shocking stuff I know, but as a caffeine half-intolerant (none after lunch) coffee drinker and someone who doesnt like tea, I don’t have much opportunity for chowing on digestives in the evenings. The other half of the packet was sacrificed to the noble cause of being a cheesecake base (I’ll write it up soon, honest). I’ve never made chocolate biscuit cake before and got the idea into my head earlier that that’s how I’ll use up the biscuits. 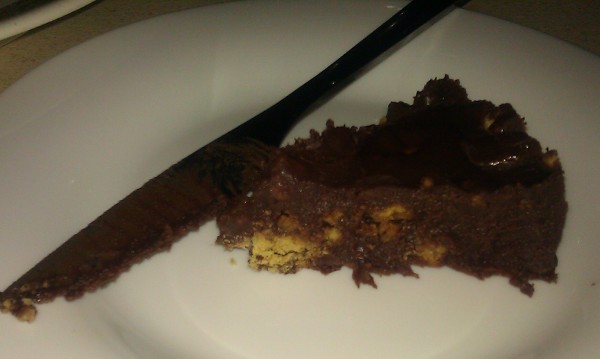 A squidgy slice of chocolate biscuit cake, and a butterknife covered in squidge

I couldn’t find a recipe in one of my books, so armed with duckduckgo I did a quick search. The one I settled for is roughly based on the odlums recipe, except for a few changes due to what I had to hand. I can vouch for maltesers being great in biscuit cake, but I dont usually have them lying around the house.

Put the butter, chocolate, and syrup in a pyrex jug and microwave on full for 40 seconds. Stir, and put it in for another 40 seconds. Stir and decide if it’s no longer lumpy or not, if needed give another short nuke/stir cycle. If the mix is smooth, mix in the cocoa powder and then throw in the biscuits. Smush into a lined springform tin or cake tin and chill in the fridge (honestly, the lining is essential, I poured straight into my springform tin with a nubbly-cheesecake-holding base, whoops).

After chilling for two hours, I took the squidgy slice shown above, despite being imperfect it’s still lovely with a big glass of milk. I reckon it’ll set better by the morning (I’ll let you know if it doesn’t). Changes to be made in the future: increase biscuity content (quantity AND type, eg. rich tea), add malteasers, line the base of the tin, learn to wait for it to chill overnight.