I have been quiet of late haven’t I. We just moved house (gone is the gas hob and fan oven, and it’s back to conventional oven and electric hob) and we’re still unpacking two weeks later. On top of which I caught that marvellous virus that’s doing the rounds. I also got a new camera not so long ago (you may have noticed the browniecheesecake picture was better than the ones I took with my phone camera). So to try out the new kitchen and my camera, I have documented my beans on toast method. 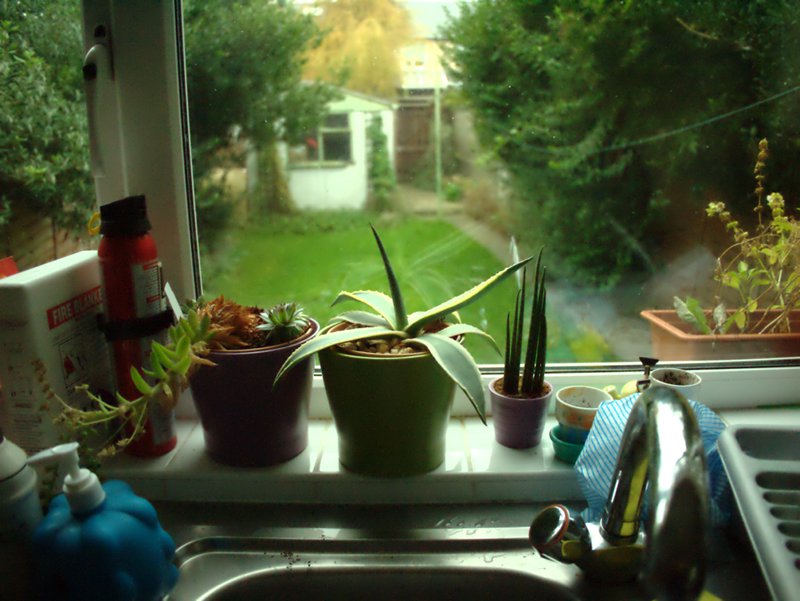 Our new back garden and kitchen window sill. The agave is still doing well, and the houseleek went to flower so the mother plant is about to die off to leave room for the chicks.

First put beans in to a pot and heat on the hob, (I never liked beans reheated in the microwave). Here I use Batchelors, but if you can’t source them, I’m sure you can use another brand (I don’t think I’ll cope well as an ex-pat). I cook mine at 4 (out of 6) on my electric hob, so they’ll be done in the lenght of time it takes to prepare the toast. 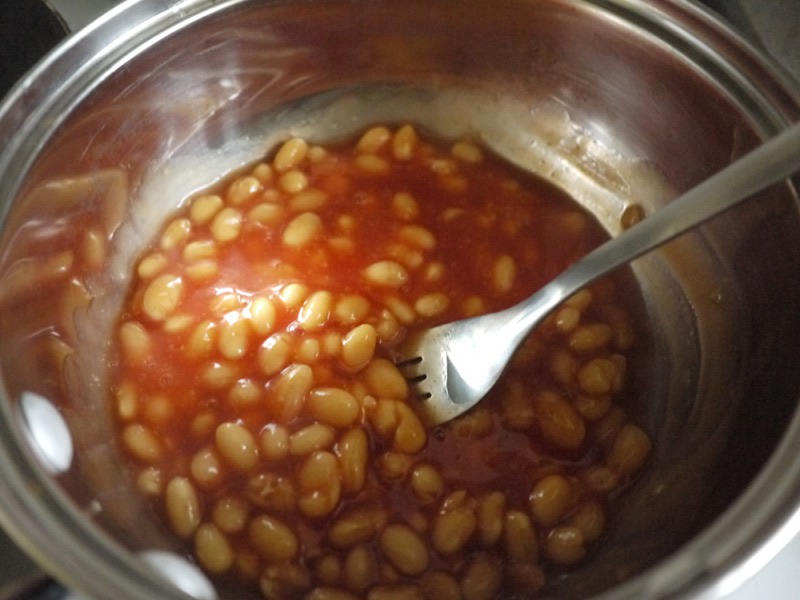 Beans heating in a pot. I don’t mind using a metal fork on stainless steel, doesnt seem to ruin the pots at all.

Then entoasten the breads. I usually toast for setting 2.5, then flip the bread over and do another 2.5, so it’s nice and even. 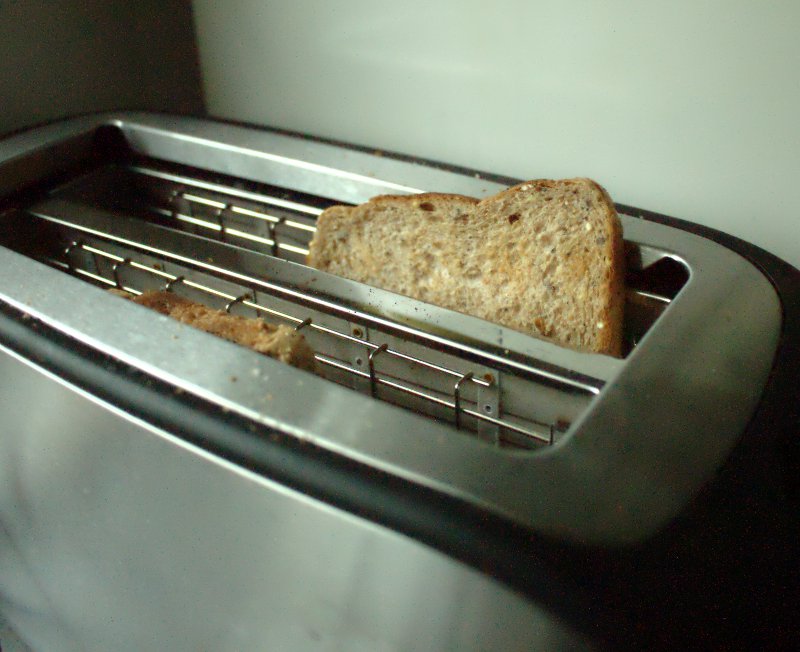 This fine piece of kit is a Cookworks four-slice toaster from Argos. It’s not really wide enough for two slices, but it’s nice and deep, so you can toast normal slices of bread without them poking out. Very important in a toaster.

Then, butter the bread. Use real butter, you can really taste the difference. 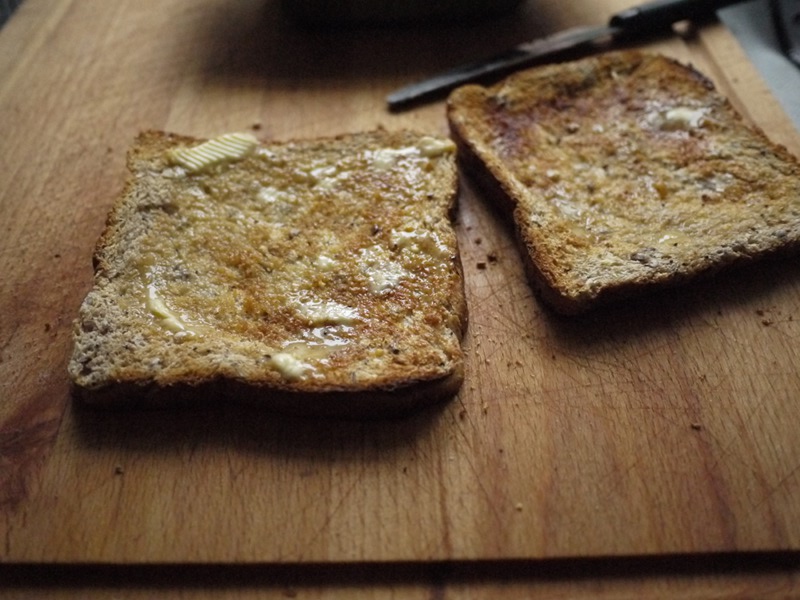 Some lovely multigrain Pat the Bakers. I quite like that it comes in a half pan size, so you don’t have to get through twenty slices before they stale. Actually, I have a new chest freezer, time to buy whole pans and freeze half….

As I like to serve my beans on toast in a bowl, cutting the bread into little squares. In theory you can serve the beans on flat uncut slices, but then you need to eat them with a knife, and not just a fork. 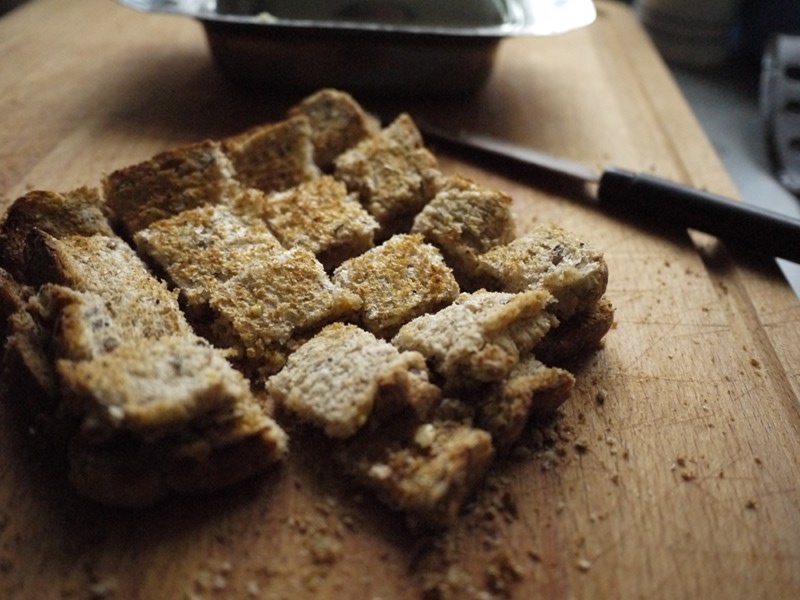 See what a decent camera will do for food. Incidentally this is the .jpg as lifted from the device, just scaled with no other kerfoobling. Looks like I got the white balance settings juuuuuusssst right.

Put the toast in a bowl, pour over the beans et voila! Beans on toast.

A bit of arty off-centre asymmetry and continuity from previous images with crumbs and the breadboard… Yeah, it’s just beans on toast, but they were mighty tasty.

People do really fancy things with beans on toast, but sometimes, that’s not what you want. That said, I would like to try to bake my own beans some time. I’ve had the ones from The Cake Café that they make themselves with little sausages in, and they are damned fine beans on toast (they make the bread themselves too).