It took me a while to realise I liked cinnamon. I think I must have been in my late teens when it hit me that this stuff is AMAZING. A wonderful warm flavour that goes great with apples, or better yet, some sugar and butter and little else. 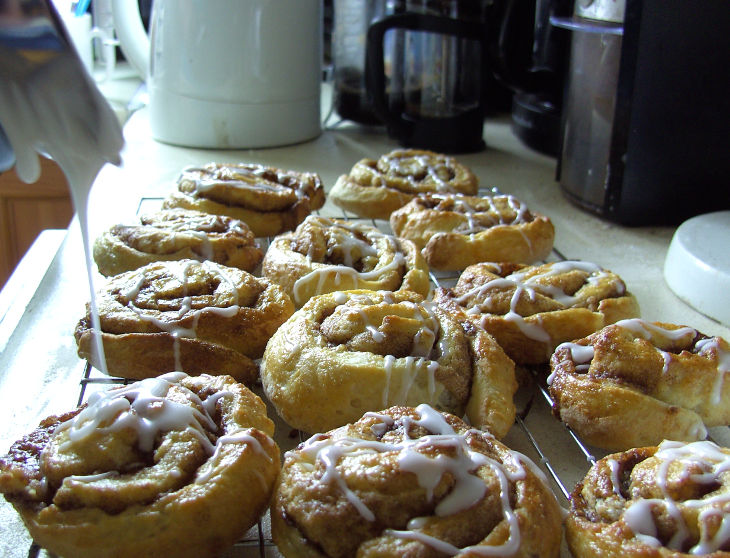 Action shot of the icing going on the cinnamon rolls

These delicious rolls of joy were made from a recipe by Smörgåsblog. You should have a good look around that site, there’s some very delicious treats to be found.

The cinnamon snail recipe can be found here.

The only modifications I made was to use half the amount of icing, and to add a quarter teaspoon of ginger and coriander to the cinnamon paste mix (since making Christmas biscuits, I can’t make cinnamon things without adding other Christmassy spices).

I made them while I was making breakfast last Sunday (sorry bout the delay in putting up the photo and link). Set the yeast going while you grind and brew coffee. Let the dough mix rise while you eat breakfast and drink said delicious coffee. Remember that you started making cinnamon rolls, panic, finish making them, and set a timer on the oven so you don’t forget again (I’ve over done them a little before, still tasty though). That’s about it.

Wandering around with a plate of these to share really helps identify the people who love and hate cinnamon, some revelations were had dishing them out in college…