As you may know, I’m a crocheter at heart.  Since I learned to crochet, I essentially gave up knitting and can’t go back.  However, I’ve taken to machine knitting as a way to still knit without the fiddly hassle….

I was recently given a Bond Classic knitting machine and have been making squares and handbags on it.  I got it into my head that I’d like to make a teddy bear, but struggled to find patterns online, so I came up with one.  As both sides of the bear need to be the same, I have actually documented this pattern and will reproduce it below for future reference.

There are a few modifications that could be made, like making the body shorter and a bit narrower.  The ears are a particular puzzle. They could be made separately but I’m lazy like that.  The head was the original pattern for the body, but I figured it was a bit small given the size of the legs I had made! 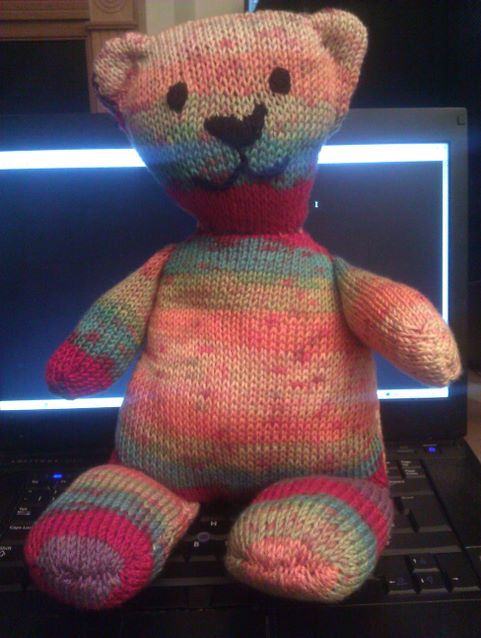 Boxer sitting pretty on the laptop. His nose was broken in a boxing match…

Knit on a Bond Classic using stitch plate 2, using Rico Creative Micro Print (a DK synthetic yarn, lovely and soft). I used exactly one ball, which is about 260m of yarn.

With wrong sides facing, stitch side seam, stitch a curve around the toe part of the foot. Turn out and stuff lightly.

Assemble as for legs.

With wrong sides  of body facing, pin arms and legs so that the point into the body. Stitch side seams and bottom seam, leaving neck open (shortest edge).  Stuff moderately (not firm but not light, middly like).

Stitch face on using contrasting yarn. With wrong sides facing, stitch side seams, rounding out the pointed corners for rounder ears, and stitch top (longest side). If you like, you can stitch along the base of the ear so that stuffing doesnt go from the head into the ear. Stuff the head moderately.

Stitch three quarters of the neck around. Stuff the neck moderately so it’s not too floppy. Finish stitching the neck.