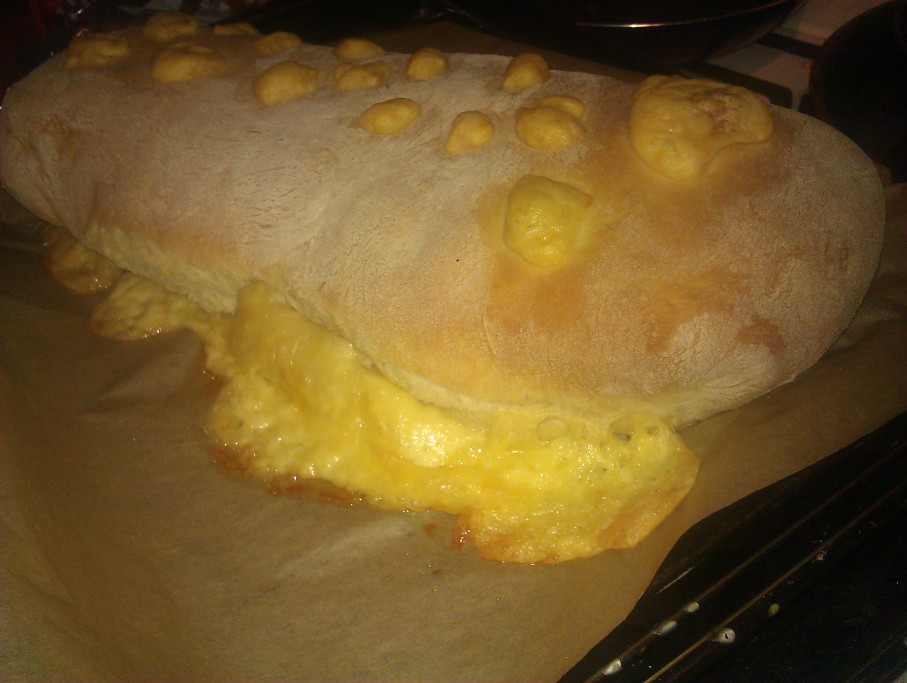 No no, there’s no dinosaur cheese in this bread, sure dinosaurs weren’t mammals so they didn’t make milk! The blobs of gouda on top make me think of dinosaurs (what a dull explanation).

Put the flours, yeast and salt into a bowl and mix through. Then pour on the milk and then the hot water (the combination of hot water and cold milk should be a pleasant warm temperature that the yeast will like). Squidge around in the bowl until it all starts to come together, you can then turn it out to knead it or you can just squidge around longer in the bowl (i dont like messing up the countertop until I need to). The dough should be slightly sticky, not totally wet, but definitely not dry. Pop the dough back in the bowl and cover with a lid or a plate or some cling film. Leave on the counter for two hours until all puffy and risen.

Flour your worksurface and turn the dough out on to it. Knead about for a bit (if noone’s ever shown you how to knead dough, fear not, it’s quite easy. Use your left hand to rotate the dough 90degrees, then use the knuckles of your right hand to pick up the dough from underneath and fold it on to it self, rinse and repeat (dont actually rinse the dough, it’s just a saying)). When you’re happy with the ball of dough (you’ll have beaten a lot of the air out of it by now), roll it out into roughly a rectangle about 2 or 3 centimetres thick. Spread (smear) the softened butter about the dough, spread the slices of cheese over two thirds of the area of the rectangle, and roll up along the longest side of the dough. Think of it as a swissroll with cheese instead of icing…. I had some spare cheese that I didn’t expect to fit, so I gave one slice to the handsome man, and the other piece got broken up and dotted on top of the roll.

When you’ve got the bread all rolled up, preheat the oven to about 220ºC. The dough will do some nice rising during this time. When the oven is hot, pop in the bread. After 20 mins turn it down to 180ºC for the last 20minutes of baking. If you think it’s not done, leave it in longer! A crusty crust is better than a doughy middle! Once it’s finished, leave it to cool before slicing. Slicing hot bread usually just makes a squishy mess 🙁 and then share pictures of your masterpiece with twitter!