Obsession with lemons you say? Who? Me? Surely not….

Intending to make lemon cake during the week, I bought a net of six unwaxed lemons in the supermarket. Sadly, I didn’t get around to it in time for my final day in my most recent lab rotation. So there were six lemons staring up at me for the past few days. Now, much and all as I love lemons, using all six at a go was going to be quite the feat, so I’ve done an experiment in lemon preservation (details to come shortly) and also made some curd. The curd used up two lemons. I used the zest of these two lemons to make the shortbread that follows (I decided I dont much like the bits of zest in curd, as my zester makes them too big).

Normally, Darina is my go to girl for kitchen help, but this time I followed Prue’s directions for shortbread, save that I substituted the rice flour for cornflour as I had that to hand. Rice flour and cornflour have no gluten in them, so when mixed with the wheat flour serve to reduce the overall gluten content of the biscuit to make it much lighter. Generally about a quarter of the flours is gluten free and the rest is wheat flour. Reducing the gluten content too much can result in a biscuit that disintegrates. 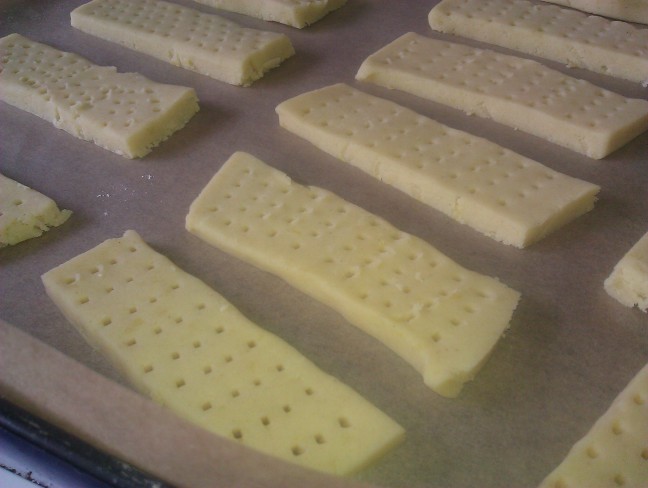 Lemon shortbread waiting to go into the fridge. Admire my quality fork-pricking of the dough...

I used my Aldi chopper to speed things up, if you have a proper food processor, use that, if not bring your mixing arm to the gym…

Beat the butter to soften it. Cream in the caster sugar and then mix in the zest. Sieve the cornflour and flour together and add to the creamed sugar/butter mix (I dont tend to sift flours when using the chopper, it’s fiddly and I’m lazy…) Blitz until it just about comes together then turn out and give it one last mix. If you’be been doing it by hand, it’ll come together into a nice smooth paste round then.

Roll the shortbread dough out to about 1cm thick on some greaseproof paper (if you try to do it on the worktop, it’ll just smush into place and stick, even if you flour it). Cut into your desired shape (I went with fingers, for good dipping times). Lay on greaseproof paper on the baking tray. Prick with a fork all over, and right through to the tray. Put the biscuits in the fridge to chill until firm. Pre-heat your oven about now to 170°C (I used 160°C as we have a fan oven, damn, I miss conventional ovens).

When the shortbread has firmed up, sprinkle on some caster sugar, for that authentic shortbread look. Pop into the oven for about 20 minutes, until the shortbread has turned a pale golden colour. Prue recommends scooshing under the shortbread with a palette knife (who owns a palette knife like) after they come out of the oven, leaving to cool for 5mins and then transfering to a wire rack, but I just slid the baking paper off the tray on to the wire rack. Be careful though, hot shortbread is fragile, so if they overhang the rack, they’ll break or if you try to move them without COMPLETELY supporting the underside, they’ll break. When they’ve cooled they’re much more robust.

Serve with lashings of lemon curd and some coffee!